Buy me a coffee?
When I was about twelve, my cousin "Lala" got an ukulele and I thought it was pretty neat. I bought one shortly after that and I learned about five basic chords. Fast forward to when my then teenage son decided to start playing guitar. I had been reading that music was good for brain health because of how much of your brain is used while learning and playing music. It was then I decided to pick my ukulele back up and start playing it again- encouraged by my son's guitar playing.

Fairly soon after that I upgraded to a Fluke Ukulele and was encouraged to play even more by having a better sounding instrument and as an active member of our local church I also had opportunity to lead music with my uke. Going to "The Midwest Ukulele Festival" in Indianapolis, Indiana, three times let me know that I wasn't the only ukulele nerd around and it also gave me a lot of music education to apply to my ukulele playing. It was about that time a fellow Minnesota ukulele player started what is now StrumMN, probably the first ukulele club in Minnesota.

In August, 2011 though 2015, I taught seminars and participated in concerts at the Silver Creek Ukulele Carnival hosted by the Two Harbors Ukulele Group in Two Harbors, MN. October, 2011 I participated in a 90th anniversary event for the Hennepin Theater Trust for the Orpheum and State Theaters in Minneapolis, MN. Here I have a video featured at MINNPOST.COM. I was proud to participate as an artist/teacher at the 2016 South Florida Ukulele Fest in Ft. Lauderdale, FL.

Of course ukulele has become a slight obsession with me like it has many of you. It takes a lot of time to feed a hobby like this and a lot is due my wonderfully understanding and loving wife... Of course she has her obsession too and you can read about it here. 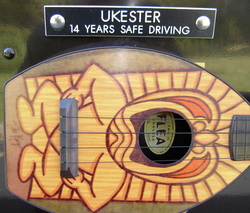 Because  I carry this Tiki flea ukulele with me to play during my work breaks and I occasionally go to Uke fests on my vacations my boss started calling me "Uke" or "Ukester". When it came time to get my new safe driving name plate for my delivery vehicle he asked me what to put on it-- Ukester it was. Of course "Brown" is the company I work for.
See me play my Tiki Flea here and here.
In case you are wondering, my "real" name is David Remiger. 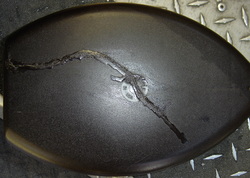 The Tiki flea I keep with me at work was purchased third hand off of craigslist and it had a big crack in the back. One of the previous owners tried to repair it by melting it together with a soldering iron. The crack was still unstable when I bought it so I contacted Dale Webb- the inventor of the Flukes/fleas via email and asked if it was O.K. to use superglue for the repair. He gave a hearty "fer sure" and there you have it.
I consider myself an unofficial flea field tester. This uke rides in a brown truck in temperatures that can range -10 to +120 or more in Minnesota. The only problem I have had is when it gets really cold the neck wood contracts and the friction tuners have to be tightened to keep from loosening. I just keep a small screwdriver in the case.

From Clunker to Tweeter 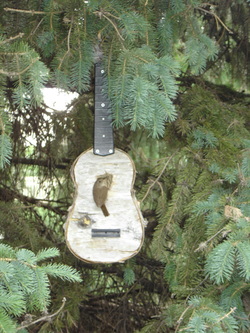 I like to think of myself as a creative person- one who is also a bird watcher. I had an old tourist uke that was pretty unplayable, so I glued on birch bark I had collected from the beaches of Lake Superior. Tite Bond II glue was used for the adhesive as it is supposed to be good for outdoor use. I made the hole smaller to prohibit sparrows from using it and within two weeks there were house wrens nesting in it. I guess there's more than one way to make music with an ukulele!


Here is video from June, 2011 when Chickadees were nesting in it! 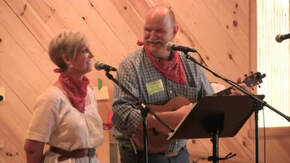 My bride and I performing a duet at the
Silver Creek international Ukulele Carnival
hosted by the Two Harbors Ukulele Group
of Two Harbors, MN.