I take an ukulele with me when I travel. They are not camera shy.
If you like this idea- it's not original... Check out these world travelers at ukulele boogaloo. 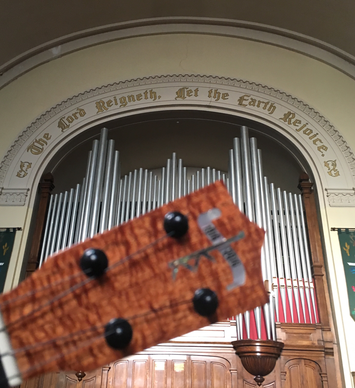 This church was the site for the concert portion of the first
Prairie Jamboree Ukulele Festival hosted by the
​Ukulele Club of Winnipeg.
I was honored to be a part of the festival teaching three seminars, had a set of music at the concert and then Sunday morning I led a gospel sing/play a long.

On my way to San Antonio, TX to visit my brother February, 2017. How do you pack? 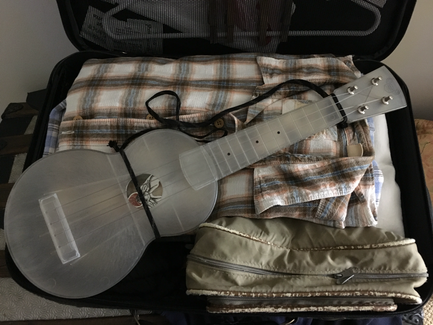 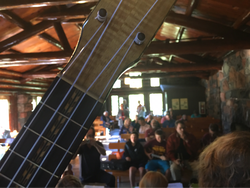 Sunday is the last day of the Silver Creek international Ukulele Carnival hosted by the Two Harbors Ukulele Group. Gooseberry Falls State Park is the site of a Sunday church service that the ukulele players provide gospel music for.
The Lodge is a historical site that was built by CCC workers during the depression. 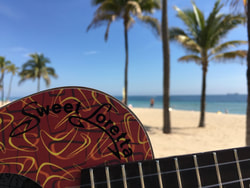 The South Florida Ukulele Festival in Fort Lauderdale was a lot of fun. Along with teaching a couple seminars and sharing music I was able to spend some time enjoying the sun and the beach too! 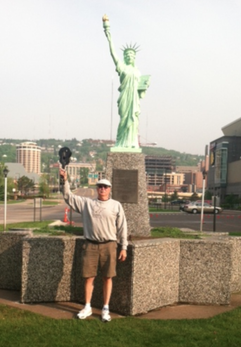 ​This copy of the Statue of Liberty
was given to the
city of Duluth, Minnesota,
by relatives of the designer
of the original statue
Frederic Auguste Bartholdi.
They were residents of Duluth. 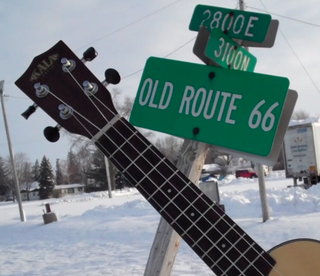 ​The historic highway Route 66
begins in Chicago, Illinois.
This portion of the highway
is in central Illinois. 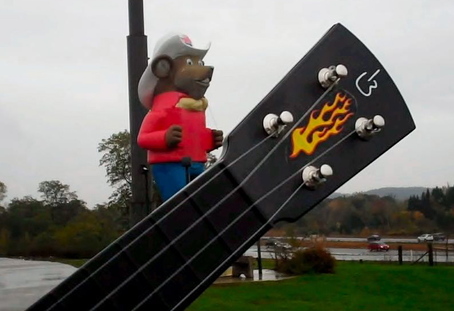 Who
needs
to build
a better mousetrap? 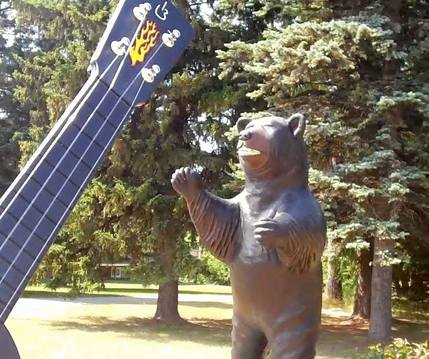 Only
You
Can
Prevent
'Ukulele
Fires! 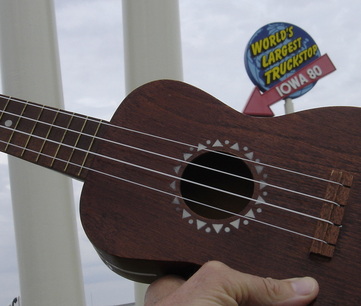 This truck stop is in Iowa and you can read about it here. It really is a huge re-fueling stop with a Taco Bell, Caribou Coffee,
a dinner buffet, showers for the truckers and a even a barber shop/salon.
They also have a full line of trinkets and doo-dads for whomever you may need a present for. Just remember to keep the shiny side up and the Bears off your tail. 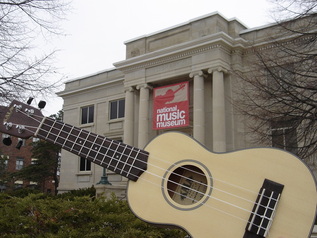 The National Music Museum in Vermillion, South Dakota. LOTS of old and rare musical instruments like Stradivarius violins, newer ones like B.B. King's signed "Lucille", and yes there was one uke on display. It was an "airplane uke". They have quite a few ukes in their collection, but like all museums there is only so much display space. Very neat place to visit. 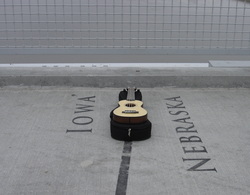 The Bob Kerrey Pedestrian Bridge is a footbridge connecting Council Bluffs to Omaha, just north of Downtown. Here you can see the state line with the Missouri River in the background. Has your uke ever been in the middle of nowhere? (sorry Iowa and Nebraska resident, but that there is funny) 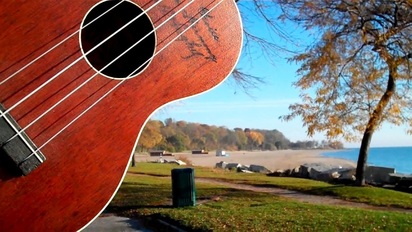 Today found me back in Milwaukee for the 2012 ukulele festival. I find it hard not to go see big water when I am near it and so I was down at the beach I visit when I am here. Beautiful sun, sky and calm water. Refreshing. 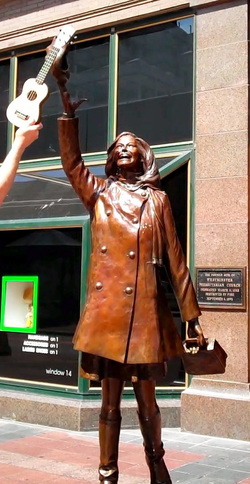 Minneapolis was the setting of the Mary Tyler Moore show which was produced from 1970-1977.  Today was a nice day to goof off so my best gal and I went "downtown". Our first stop was at the corner of 7th Street and the Nicollet Mall where the T.V. Land statue of Mary's iconic Tam toss statue is located- the same location the intro of the show was filmed.
We had  two Minneapolis police officers in their squad car looking quite intently at the small case tucked under my arm. I hope they smiled with relief when I pulled out my Kala Travel ukulele for this photo...  Here is the T.V. theme song "Love Is All Around".

As a side note: A Macy's store is the background of the photo, but when MTM was there it was a Dayton's. Dayton's was an iconic department store in Minnesota until it was sold to Macy's. The Dayton family is also key in the Target store corporation. Mark Dayton (a Dayton heir) was rated one of America's "Five Worst Senators" by Time magazine in April 2006 and as happens all to often in politics was elected as governor in Minnesota January, 2011. 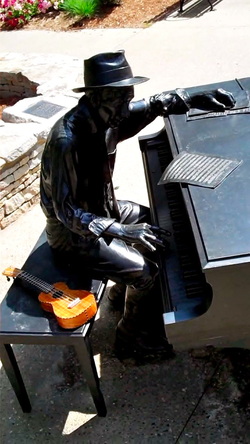 I am a fan of Hoagy Carmichael and his music and had the opportunity to visit a life size statue of him on the campus of Indiana University in Bloomington, Indiana, where he was born. The statue is very life like- on the piano bench there are even several coins which appear to have fallen out of his left pants pocket. The song he is working on is "Memphis in June" and the songs "Georgia On My Mind" and "Stardust" are under his his left hand in the folder.

Here is a link to his Wikipedia biography.

Here is a time lapse video of the statue being sculpted.

Here is a cool photo blog of Hoagy's statue- 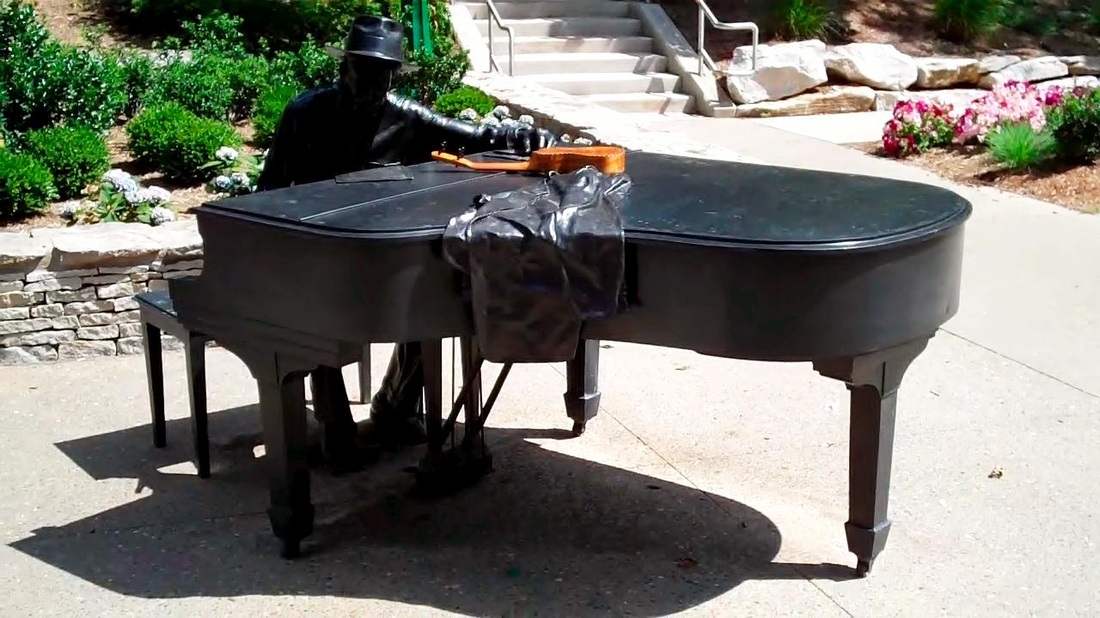 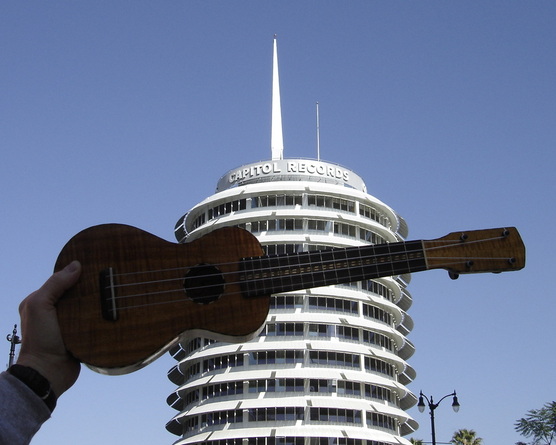 Taking some time "touristing" in the Los Angeles area, we are outside the Capitol Records building on Vine Street. No one rushed out to sign me to a contract, so I guess I'll remain an independent label... This is pretty close to the "stars" of Hoagy Carmichael, John Wayne, Arthur Godfrey, Roy Rogers, John Ford and too many more to mention on the "Walk of Fame". 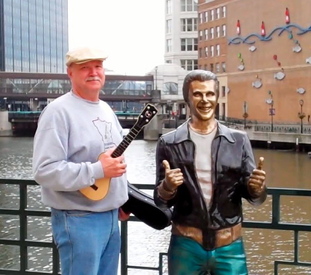 This year while at the MilwaUKEe Ukulele Fest I made it a priority to find the "Bronz Fonz". I had attempted this last year, but was down in the area so early on a Saturday morning there wasn't anyone around to ask for directions! This year there were plenty of people there and I wasn't the only one getting a picture taken with him. This is a life size statue of bronze with painted jacket, t-shirt, jeans and boots. Milwaukee was the city where the Fonz, the Cunninghams and of course Laverne and Shirley lived. The water way behind us is the Wisconsin River, but you knew that!  AAAaaaaay!!

This was my first pilgrimage to Needmore, Indiana, to the UWC. It was as unlike and like a uke festival as it can get. I call this a "uke fest for the common man". Open mic for anyone willing to share their love of ukulele with those loving to hear it. My brother-in-law ( a hoosier) told me if it is in Brown County that it's gonna be like Woodstock. Well, from what I've read it may very well be the ukulele-love-in. I hope to be back some day and I'll be better prepared for the fun.
In the photo I'm standing in the back row near the left wearing the blue shirt of the Two Harbors Uke Group. (My StrumMN shirt was worn the day before) While we were waiting for the photo to be taken a spontaneous play/sing of "You Are My Sunshine (my only sunshine)" broke out. Can't waste a moment! I'm not sure who took the photo- but thanks to whomever did!
A BIG THANKS to Mike and Tookta of Mainland Ukes for sponsoring this fun time-- 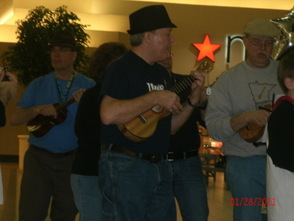 On January 28th, 2011, Brian K (founder of StrumMN in the black hat) and I (in goldish cap) went to participate in the first ever Trans-Global Uke Jam.
The Cheez Land Uke Band of La Crosse, Wisconsin, linked up with the Blue Mountain Uke Group in Lawson, New South Wales, Australia to play simultaneously via the internet. Though there were some technical difficulties (the Australians were able to play with us, but we didn’t know it) the show did go on, and we are glad it did! Al, wearing the blue shirt is the founder of the Two Harbors Uke Group (THUG). He was there with a few of his friends as well as two other members- Mickie and Bruce from our group StrumMN. They are playing behind Brian. 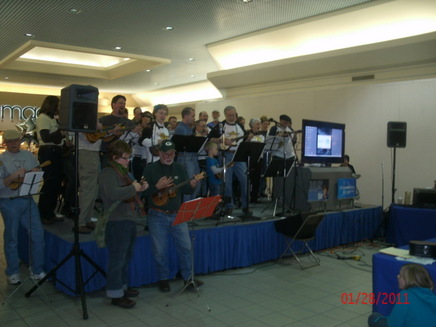 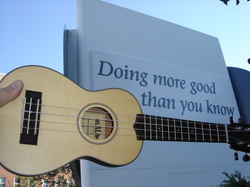 I wonder how many more places we could use this slogan? It is posted on the back side of the Wisconsin Blood Center's sign two blocks away from where the festival was held. I spotted it when I went for a walk before the fest opened and it seemed like the perfect time for a picture. If you want to learn more about this wonderful one day event that was hosted by the Milwaukee ukulele club check out their website here. Photos of the days events are posted there to view. 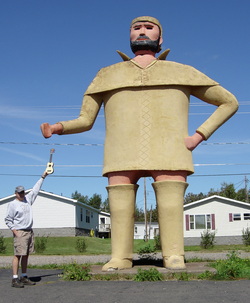 When I was growing up my family camped quite a bit for vacations. We drove by this "Voyaguer" in front of the Voyaguer Motel in Two Harbors, Minnesota, many times. I believe he used to have a canoe paddle in his hand. I've been told that some locals call him "Pierre, The Pantless Voyaguer". To put him into scale, I am 6"3" tall. My family has continued the "up north" tradition and really love spending time by Lake Superior. There is a very simple resort we like to stay at and the cabins are spittin' distance from the lake. We were there for four nights this year and had a very relaxing time. One night I had a wonderful time with T.H.U.G. (Two Harbors Ukulele Group) which is led by my musical friend, Al. Thanks Thuggers!

Here are some lovely photos of Lake Superior.

A sunny day in Wisconsin.... 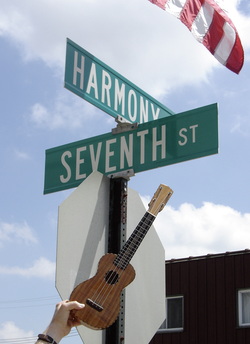 This is at the corner of Harmony and Seventh St. in Osseo, Wisconsin. It's a nice little town a couple miles off of I94. These street signs were right across from the quilt shop my wife was shopping in. I was sitting outside on the "husband bench" playing my ukulele when I noticed my location and I couldn't miss the photo-op.